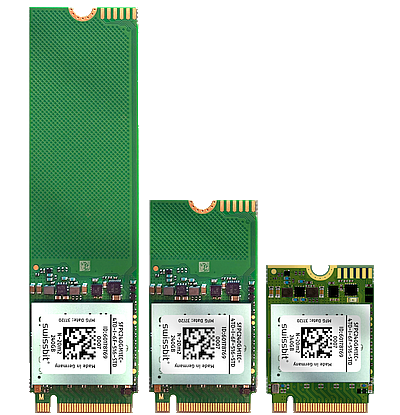 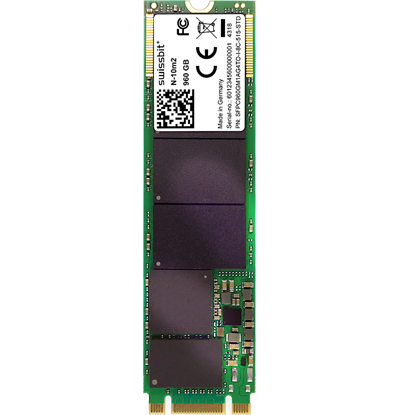 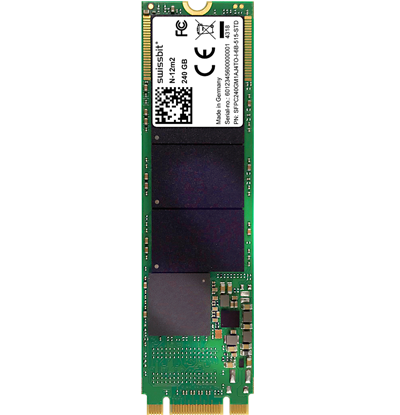 Although SATA is still a dominant interface in embedded and NetCom systems, the future belongs to PCIe. PCIe breaks the bandwidth limitations of SATA and offers flexible solutions with multiple lanes that can be combined.

An important innovation to increase the performance is the new protocol NVMe, which has been designed specifically for Non Volatile Memory. It reduces significantly the latency of read and write requests by using more efficient commands.

The Swissbit N-10m2 module, a PCIe Gen3 / NVMe 1.2 module, only uses 2 PCIe lanes and reduces the power consumption without sacrificing performance. Even if only operated with one single PCIe lane, the performance still exceeds the SATA limits. The N-12m2 module is a DRAM-less version with reduced power consumption.
For high endurance requirements the N-10m2 and N-12m2 are also available in pSLC versions with N-16m2 and N-18m2 series name. They deliver more than tenfold TWB values.

Various effects like data retention, read disturb limits, or temperature can impact data reliability. The latest generation of Swissbit products use special methods to maintain and refresh the data for higher data integrity.

Intelligent Power Fail Protection and Recovery protects data from unexpected power loss. During an unintentional shutdown, firmware routines and an intelligent hardware architecture ensure that all system and user data will be stored to the NAND.

In many industrial applications the data is written to the NAND Flash once and is only read afterwards. For such cases, the firmware can be optimized in order to guarantee the highest possible data retention and less read disturb.

This feature uses an uninterruptable sequence of data erase commands. Even a power off can’t stop the process, which will continue upon restoration of power. The optional enhanced feature allows the customer to sanitize the data according to different standards like DoD, NSA, IREC, etc. The purge algorithm can be started by a software command or through a hardware pin.

Robustness is one of our key specification targets. The design, assembly and use of selected materials guarantee an extremely solid design which has been validated by extensive testing.

The sensor allows the host hardware or software to monitor the memory device temperature to improve data reliability in the target application environment.

The TRIM command allows the operating system to inform the SSD which blocks of data are no longer considered in use and can be wiped out internally, which increases system performance in following write accesses. With TRIM Support data scrap can be deleted in advance, which otherwise would slow down future write operations to the involved blocks.

The WAF (write amplification factor) for MLC-based products is reduced by combining a paged based FW block management with a powerful card architecture and configuration settings.

Sophisticated Wear Leveling and Bad Block Management ensure that Flash cells are sparingly and equally used in order to prolong life time of the device.

Swissbit‘s embedded memory and storage solutions are designed and approved for reliable operation over a wide temperature range. The products are verified at temperature corners and prestressed with a burn-in operating functional test (Test During Burn In – TDBI).