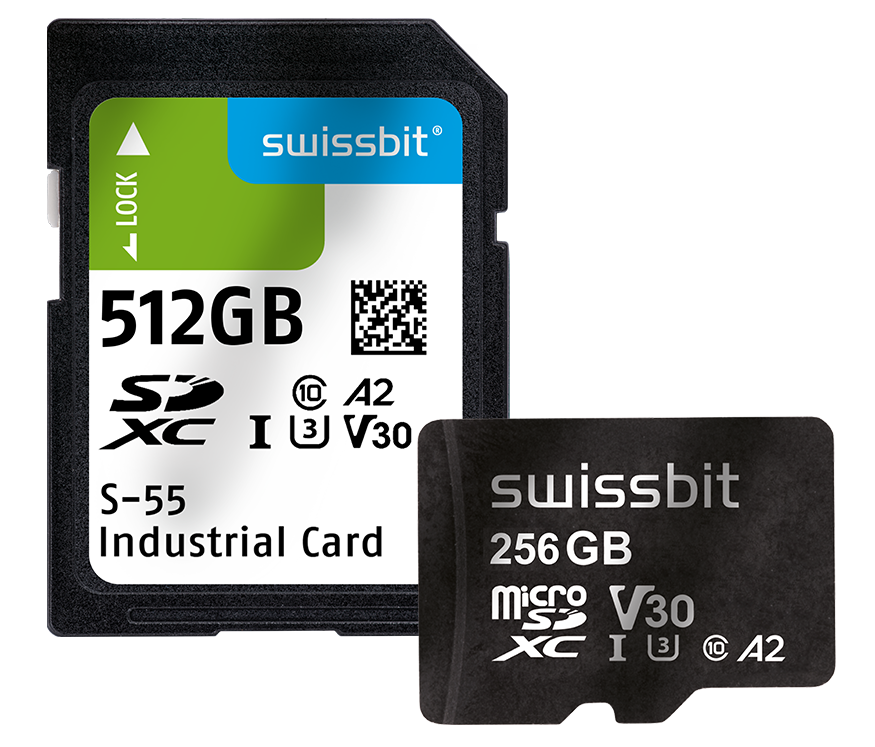 Bronschhofen, Switzerland. April 26, 2022 – Swissbit is expanding its range of industrial grade SD and microSD memory cards. With "high reliability" at their core, the new S-55 and S-58 series integrate state-of-the-art technologies, making them the first choice for demanding applications. Swissbit accomplishes this by combining leading-edge industrial grade 3D TLC NAND technology with a powerful controller and firmware optimized for maximum reliability. The SD and microSD cards are available in capacities ranging from 16 to 512 GB and support an extended temperature range of -40 to +85 °C. The new S-55 and S-58 series are based on Micron flash chips and complement Swissbit's existing S-50 and S-56 series, which use Kioxia 3D NAND. This provides Swissbit customers with the greatest possible flexibility for the selection of the most suitable cards for specific requirements and applications.

The new SDHC/SDXC S-55 and S-58 series provide all the prerequisites for their intended applications in areas such as data logging, IPCs, HMI units, POS/POI terminals, and medical and surveillance applications. For example, all cards are designed for temperatures ranging from -40 to +85 °C and optimized to tolerate temperature fluctuations between read and write operations across the entire specified temperature range. This reduces servicing intervals and lowers the total cost of ownership (TCO).

Swissbit of course continues to offer a 3D pSLC mode option with its S-58 series, which is particularly well-suited for applications requiring extensive recording of small data blocks or constant high workloads. Along with capacities ranging from 16 to 128 GB (S-58) and 16 to 64 GB (S-58u), the pSLC versions provide up to ten times the longevity and up to twice the speed.

With the release of the S-55 and S-58 series, Swissbit maintains its commitment to supplying memory cards of the highest quality at competitive prices while assuring long-term availability. This is further underlined by the fact that Swissbit now offers NAND flash in its SD card portfolio from its two strategic partners, Kioxia and Micron. In addition to the new series based on Micron’s 3D NAND, Swissbit already offers memory cards from its S-50/S-56 range fitted with Kioxia’s flash chips. While the performance specifications and reliability advantages of both series are almost identical, the S-50/S-56 series is also available in capacities as low as 4 GB. Additionally, this strategic alignment enables customers to fully respond to short-term market fluctuations by ensuring the capacity to deliver at any.

With the broad range of "high reliability" SD and microSD cards, Swissbit provides its customers with the greatest possible choice and planning security – as well as the perfect opportunity to switch from legacy NAND technologies such as 2D MLC or SLC to the latest 3D TLC generation.