From CompactFlash to SD Express 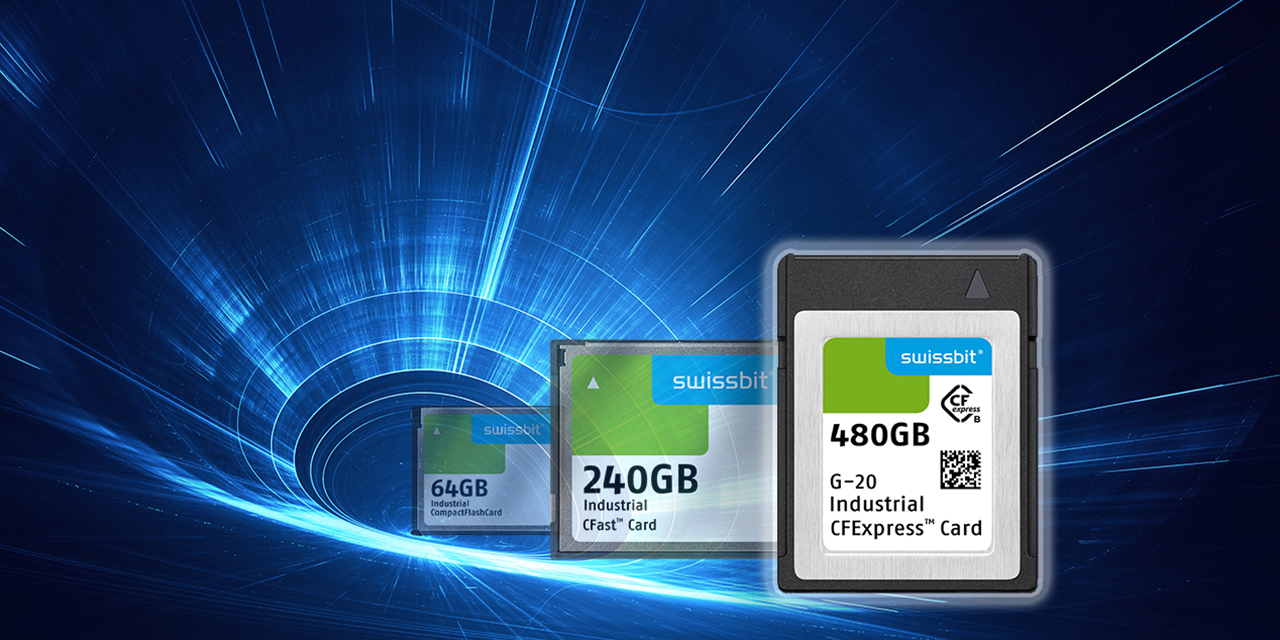 Industrial Memory Cards Over the Course of Time

Flash memory cards have been indispensable in the consumer sector for years. But they also have a vital role to play in the industrial environment – and there’s a good reason for that. Time for a brief review of the development of removable storage media and what to look out for when you need to use them in industrial applications.

When NAND flash became more widespread and more affordable in the 1990s, the concept of developing an alternative to vibration-sensitive magnetic hard disks became a reality. Due to the limited lifespan of NAND chips, it was decided to use a replaceable form factor that would also be much smaller than classic 2.5-inch HDDs. That’s why, in the mid-90s, the CompactFlash card with PATA interface was born.

CompactFlash cards featuring memory sizes in the MB range were quickly adopted by digital camera manufacturers. Shortly thereafter, CompactFlash readers found their way into laptops and notebooks and turned the cards into an additional, portable storage medium. In industrial applications, CompactFlash showed many advantages, most notably in terms of robustness and resistance. The CompactFlash Card (CFC) has developed steadily over the years. It’s now up to version 6.0 and performance and capacity have continuously increased.

The PATA interface (parallel data transfer) used with CompactFlash cards was later replaced by the serial version (SATA) due to the high number of signal lines in the parallel incarnation. The well-established form factor was retained, and the new product was launched in 2008 under the name CFast. However, since the SD card had begun its dominant march into the consumer market in the meantime, there were relatively few adaptations of CFast in that sector. But that was not true for industrial applications. Here, CFast was used widely in a manner similar to CompactFlash cards. There were many reasons where CFast offered tangible advantages over SD cards: a higher storage capacity; the complete physical protection of the interface’s electrical connector from contact and contamination; better heat dissipation; the continued use of IPC housings with CFC slots; and, significantly higher performance.

Just like the change from PATA to SATA, evolution is also progressing with CFast cards, with a change to the PCIe interface imminent. PCIe is the new interface standard for storage products. The PCIe 3.1 generation enables data rates of up to 4 GB/s while the new NVMe protocol ensures very low latencies for the host drivers and controller firmware.

Once again, the first approaches to adoption of the XQD format came from digital cameras in professional photography. In fact, the XQD standard was defined by some digital camera manufacturers as a memory card with a PCIe interface. As early as 2012, the first cameras with the proprietary XQD card came to market. In terms of physical size, XQD cards sit somewhere between an SD card and a CFast. However, in contrast to the SD card, the electrical interface is on the front side with the connections protected against contact.

XQD initially only supported a single PCIe lane. But it evolved into the CFA's (CompactFlash Association) CFexpress in 2017, becoming a published standard. To cover different performance requirements, there are slim types with a single PCIe lane (Type A), the XQD-compatible Type B version with two lanes, and a significantly larger 4-lane Type C version. With the 2-lane Type B version, data rates of around 1.5 GB/s are possible, offering four times the performance of CFast. Consequently, it is foreseeable that the CFexpress card will find its way into the same industrial applications as the CFast cards that preceded it.

In addition, there are advantages that already distinguished CFast: contact-protected contacts, an enclosed housing for protection against environmental influences as well as safe exchange even under tough industrial conditions. CFexpress cards are also hot-pluggable – they can be replaced during operation – and thereby ensure less downtime in industrial plants.

Another candidate with a PCIe interface is currently competing for the market of exchangeable media: the SD Express card. It combines the SD memory card format and the SD interface with an additional PCIe interface. This makes it backwards compatible with previous SD card applications and at the same time advanced for use in PCIe systems. To what extent this standard will become established remains to be seen.

What distinguishes an industrial memory card?

Despite the widespread use of memory cards in consumer and industrial environments, the requirements in both markets differ fundamentally in some cases: for example, thermal management is extremely important in industrial applications. It ensures that heat generation is kept within limits by throttling the data rate without impacting the performance of the system too much. In addition, a NAND flash should be used that covers the industrial temperature range from -40°C to +85°C and can also handle cross temperatures (different temperatures for writing and reading).

One final consideration: many industrial applications have a significantly longer service life than consumer solutions. For example, a controller in energy supply systems can be operational for up to 20 years. Therefore, replacement memory cards are still needed for such long-lasting systems, and specialized manufacturers such as Swissbit are needed to offer long-term support for legacy systems, even after a generation change.

Joining Swissbit in 2003, Roger helped shape the company during its startup years. Since July 2019 he serves as General Manager of the Memory Solutions division. Roger is a proven expert in the electronics industry and looks back on more than 20 years’ experience.